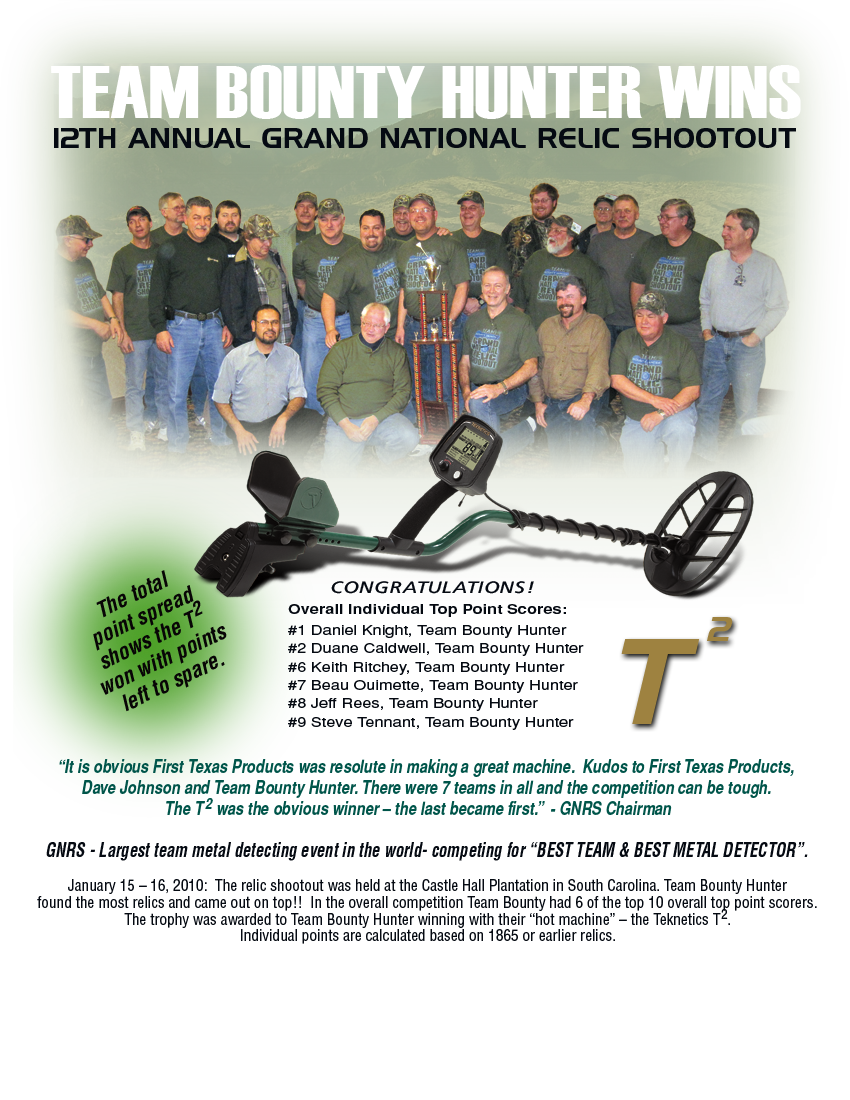 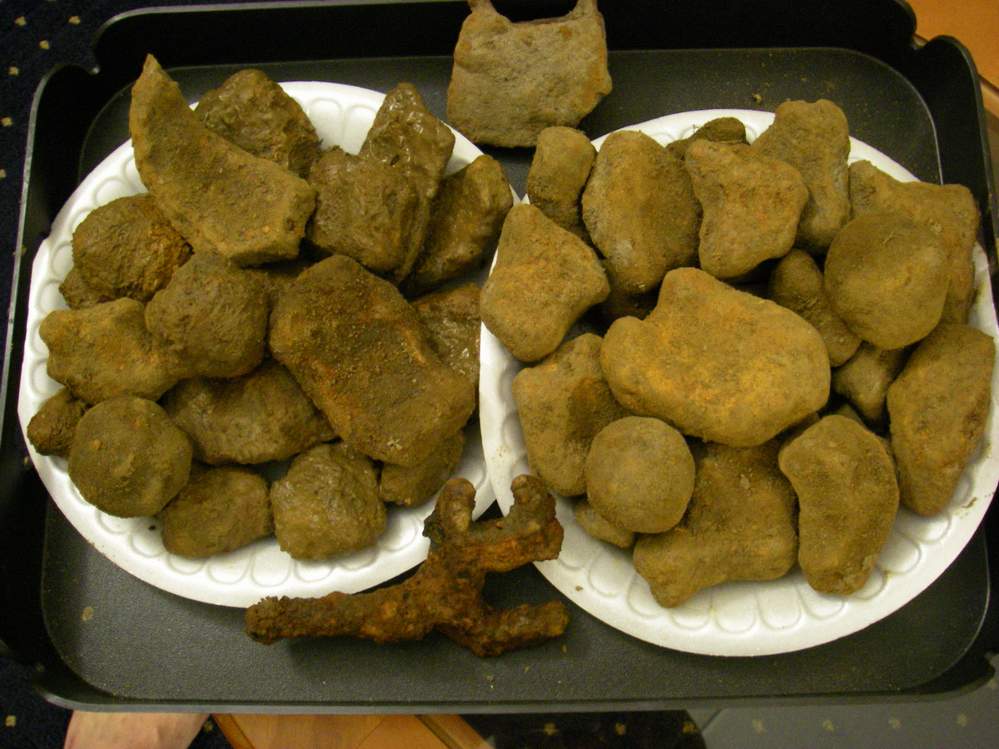 Being a returning member of Team T2 from the 2009 GNRS I already had an idea of where to hunt. There had been reports of artillery fragments being found in the southern zone at the end of last years contest, so I teamed up with other T2 users and headed there on the morning of the first day. We spread out to see if we could 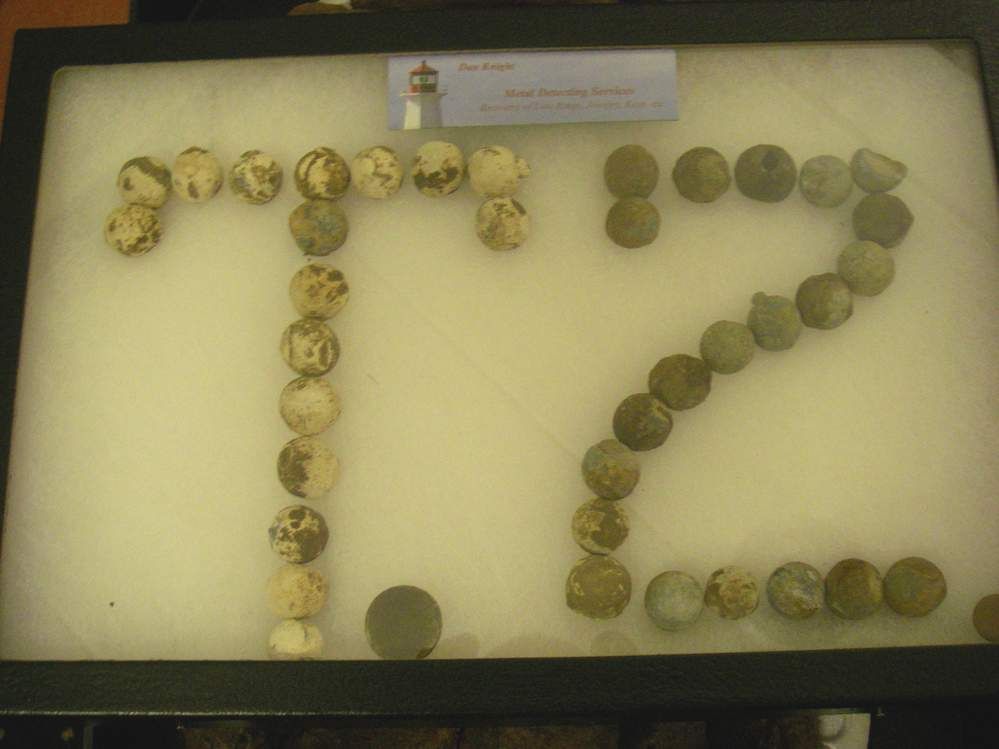 find a hot spot, and about two hours in I found a couple of lead round balls in a heavily wooded area where they shouldn't have been. I called in teammates and soon we found enough targets to identify the area as a cannon ball air burst zone. 58 calibur lead round balls and 2" cast iron grape shot were being found at regular intervals in an area 200' x 200'. And while we had not been told whether or not they counted as points in the contest, I started carrying the larger iron shell fragments that I uncovered. Note I was hunting in the 2+ mode so it was pretty easy to distinquish the low growl of iron vs the higher pitched round balls. But while "more experienced" hunters were ignoring those large iron signals, I usually beach hunt so even finding these rusted peices of cannon ball shell were a thrill. And at the end of the day while I had found ~ 30 lead balls, the additional 30 shell frags also counted as points, putting me in the lead for our team. 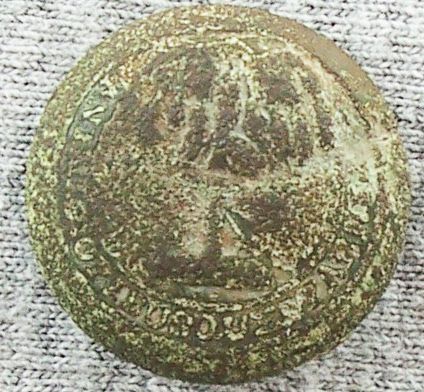 I had been using the T2 for, about a year and a half. It was living up to all of the comments I had heard about making my old hunting spots become new again, by finding deeper targets that other detectors had missed. I had heard that the new T2 LTD was even better. So for the up coming GNRS, I took advantage of the opportunity to get a new T2 LTD to use at the hunt. In the weeks before the hunt, I only managed to get out relic hunting maybe 6 times to test out the new LTD, but in that short time, I was convinced that all the hype about this "new and improved" version of the T2 was also right on target. I dug several bullets from some amazing depths in some well hunted sites.

So at the GNRS, I chose to start hunting in an area where I had left off the year before. Even though I knew that this little picket post had been pounded very hard before, I also knew that the new LTD had the capability to find anything that might have been left there. It wasn't long before my hunch started to pay off. In amongst the scattered iron signals, I soon heard a sweet positive signal. Digging down, I soon found a very deep brass asjustment hook. Then beside it, a deep, but very small rain poncho grommet. Then a small flat button, and some pieces of camp lead. In just over an hour, I had several good relics, and a good start on my "point total". I started searching along a fire lane that had been cut through the woods, and got a really nice signal reading 84 on the target ID. I thought I might have a seated dime here. I dug down about 8 inches, and the signal was deeper in the bottom. I took out another shovel full of dirt, and then saw something round in the bottom of the hole. A button..!! Now that's more like it, but what kind is it I thought. After carefully brushing away the dirt, I began to see the faint outline of....a palmetto tree..!! I needed to see no more. I knew I had found what I was looking for on this hunt. I had traveled to SC, and now had 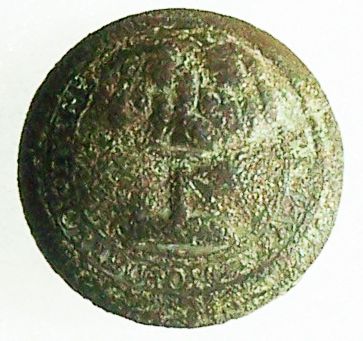 found my first SC button. It wasn't until later that evening that I found out just how good of a button I had found. Pouring over the "button books", there was nothing exactly like this one to be found. Wow, a previously unknown and unlisted variety. As deeply as it was buried, I could see how others might have missed it, but the T2 LTD in boost mode had made it sound like it was only 2-4 inches down.

I stayed in that small area (about a half an acre) all day, and by quitting time, I had sored 32 points, or 32 relics, and that is not including about 25 small to medium pieces of camp lead, and a number of .22 leads, .22 shell casings, and shotgun shells. It DID include several Williams cleaners and 3-ringers, brass rivets, grommets, P-caps, flat buttons and button backs, a brass harness buckle and a scabbard tip. That's not a bad result for hunting in a spot that was considered to be "well hunted". In fact, that result, added to my second day total was enough for me to be the second top point scorer on our winning team, and tie for second place over-all in individual finds out of 182 hunters. Take it from me.... the new T2 LTD ROCKS..!! 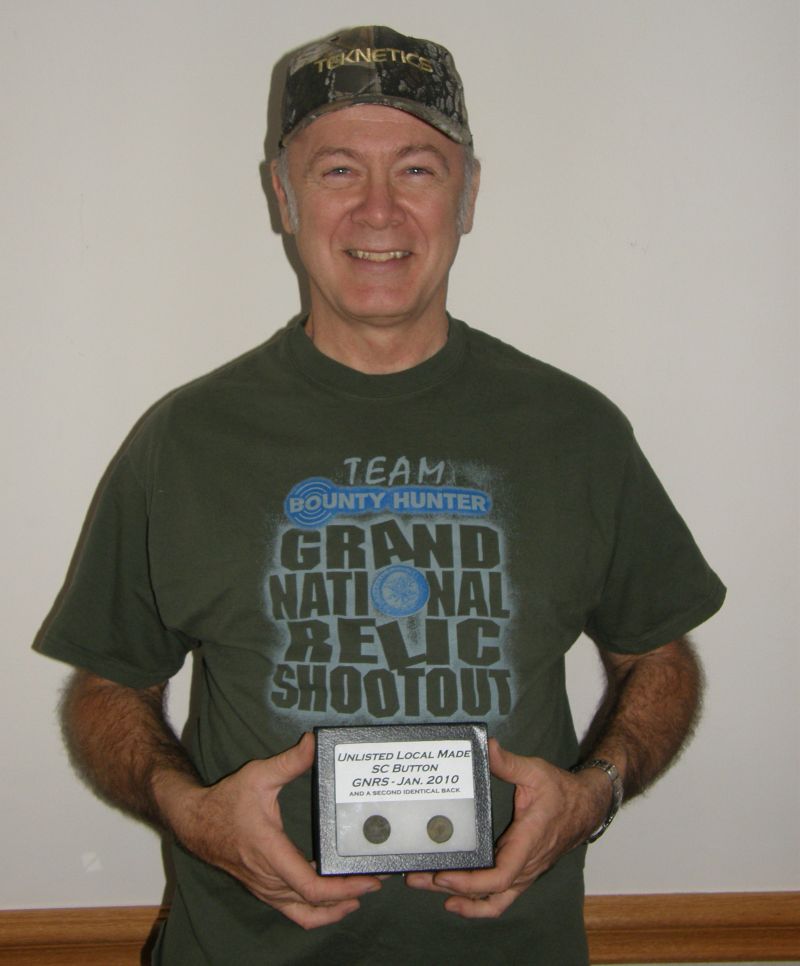 I was hunting in a spot that had produced some good relics in the past, but had been hunted hard. However, I just knew that the new T2 LTD had the capability to find anything that others might have missed. I was not disappointed. Among the 32 relics I dug in this one small area, was this currently unknown and unlisted SC button. Dug at a depth of greater than 8 inches, the T2 made it sound like it was only 2-4 inches deep. It was good enough to be judged as the 4th best relic of the GNRS in the "top finds" category. The next day, I returned and found a second identical button back. Both are proudly displayed together.

I have been detecting since I was 9 yr. used most every kind of machine that was supposed to be better than the last, including the heavy multiple frequency 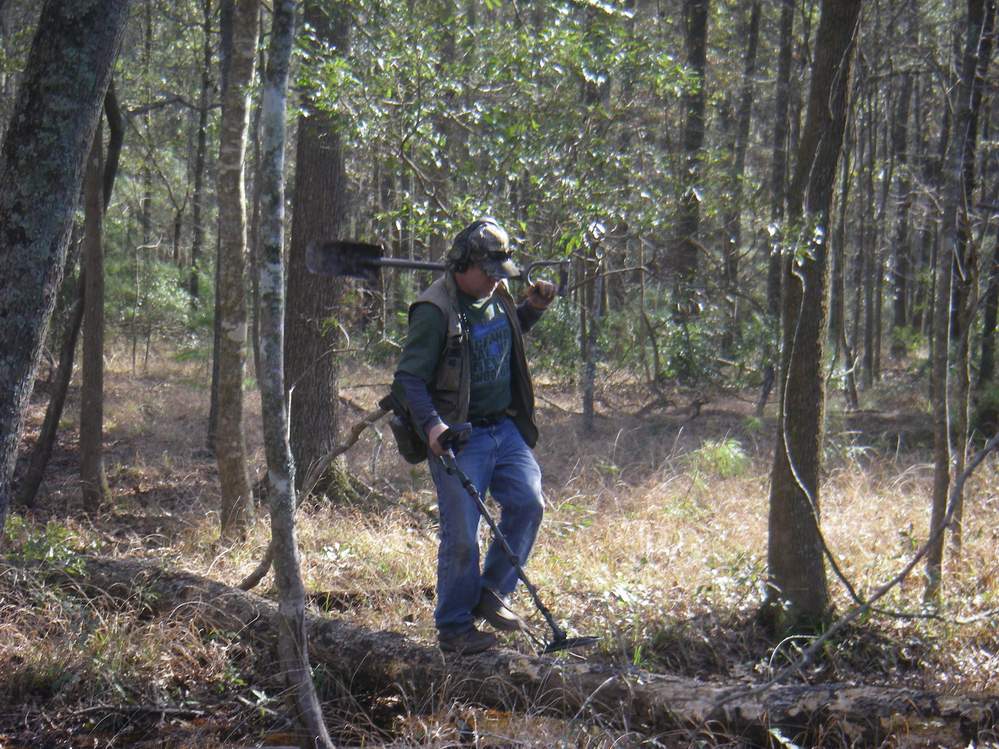 machines,...the T2 has topped all, I'm done looking for the best machine, until First Texas comes out with something even better - I don't know if that is possible.

I just wanted to say that I have been using the T2 since it came out. I didn't think there was a better relic machine around. I now use the T2 LTD and you can just feel the power. I was with a group hunting shell fragments on the last day of the GNRS. Before the day was over I actually had to move my finds pouch to behind me because the coil was picking up my finds in the pouch on my swing. The way the machine responds to finds is terrific. Where iron will mask a lot of finds for different machines, the T2 and T2 LTD will let you pick out other metals like copper, brass, and silver that other machines can't. My brother a few years ago found his first gold coin that had a old iron nail laying against it while hunting with a T2. Like many others I would have to say that I will probably be a T2 user for life. Thanks for making such a great machine. Thanks

I bought my original T2 when it was offered to the Bounty Hunter team at the Grand National Relic Shootout (GNRS). I received it just before the hunt so did not have a hugh amount of time to learn it well. In spite of this I think I did really well. I was very impressed with the T2's ability to find the tiniest target (pin heads) at incredible depths. Sometimes these small targets were so tiny they drove me nuts trying to find them!

I have since learned how to use this machine so well that it has become an attachment to my right arm. I can pick out good targets among tons of trash. I proved this on one of our trips to England. One of the sites we hunt is an EXTREMELY trashy field that was used for quite some time as the town dump. However, underneath all of this trash is a Medievel Fair site. All the trash has been tilled up by tractors and mixed in with the wonderful artifacts. A true test for any machine.

I picked an area that I thought looked good and started to detect. I began to find one tiny hammered silver coin after another totaling six by days end plus many other neat things. After this I was nicknamed the 'Hoover'.

I used the T2 at the GNRS located at the Castle Hall Plantation site and found my first cannon ball!!!! To say it was at least two feet down is no exaggeration.

I can also pick out the smallest gold on beaches that many other machines have missed. I have a lot of great finds from this machine.

I bought the T2 LTD for the next GNRS and I was just as impressed with this machine as I was with the original. Being this last GNRS was just this past January and Pennsylvania has had record snows means that I haven't gotten out with it very much but as soon as the ground starts to thaw I will be out there finding how well the cache mode works.

I did get a chance to hunt a very worked over field next to a 1700's farmhouse and found a King George copper and just because I was going through withdrawal I insanely attempted to hunt a frozen field behind another 1700's barn and chiseled out another King George copper.

Since writing this testimonial I have to add that the ground here has thawed and I promptly went back to the field next to the 1700's barn. A large part of this field is very trashy with hugh amounts of chopped up aluminum pieces and other junk thrown there through the years by the homes occupants. In the midst of all this trash I got a good signal. I thought it was probably another aluminum can but dug anyway. Well to my astonishment what turned up was a beautiful 1891 silver Morgan dollar. My first silver dollar ever!!!! Another reason to love this machine.