One of my metal detecting buddies told me a funny story: The owners of an heirloom ring went out on their farm. The ring had belonged to the wife’s great-great grandmother and was valued between $23,000 and $25,000.

The husband had bought a new metal detector and asked his wife to place the ring in a field so he could search for the ring with his new detector. He quickly found it. Then, he asked his wife to go up about 100 feet and hide it in some clover. She did and then walked back down to where her husband was waiting to start his next “search” with his new metal detector. But when he asked his wife where she placed the ring in the field, she was at a loss because all the clover patches looked the same to her. The ring was lost.

At least seven other people had searched the area for the ring with their metal detectors. After talking with the owners of the ring, I told him I would like to try to help him out. I decided to use my Teknetics® G2 on which I placed a 5” coil. The first day out, after searching for an hour and a half, I was rained out. I searched again on a second day for two hours. Third time’s a charm! On the third day, after searching for half an hour, I found the ring. I returned the ring to the happy owners. 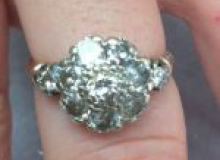