Boy what a great time we had in March. I bought a new metal detector a Teknetics T2. In March I found 2 un-hunted sites in Aiken County, South Carolina.

The first site was two home sites in a plowed field. I went hunting with a friend and man we have fun. The weather was just right in the 60’s. The soil was like beach sand, easy hunting; it had been rained on a lot during the winter. It just doesn’t get any better than that. We hunted this site for 2 weeks. I found 33 buttons and 6 coins. The buttons I found were 5-confederate, 1-rifleman cuff, 1-CSA , 3-cast I’s, 2-brass, 1-pewter, 7-union, 2-eagle I’s, 5-eagle general service, 6-underwear, 1-Augusta, GA button with Augusta cannonball on front side and 1-good year N.P.C.O pt. 1851 hard rubber button which was laying on top of the ground. The 6 coins were 1-1855 seated liberty half-dime, 1-1903 Barbour dime, 1-1912 nickel, 1-shield nickel, 1-French coin and a love token. Also found, 2 toe plates, a few musket balls and fishing sinkers.

On the second site I found (still in March), a slave quarters and over 300 buttons between my friend and I. Using my T2

In May, I went back after they plowed the field and found 114 buttons and 1 half 1847 dime. This site was a relic hunters dream, the only trash we found was a few shotgun shells and iron targets. It just doesn’t get any better than this! Good hunting to everyone, hope your next find will be the big one. 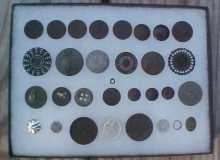 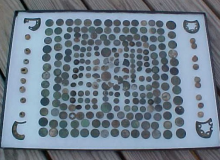 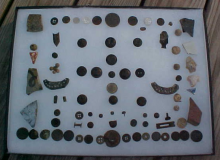