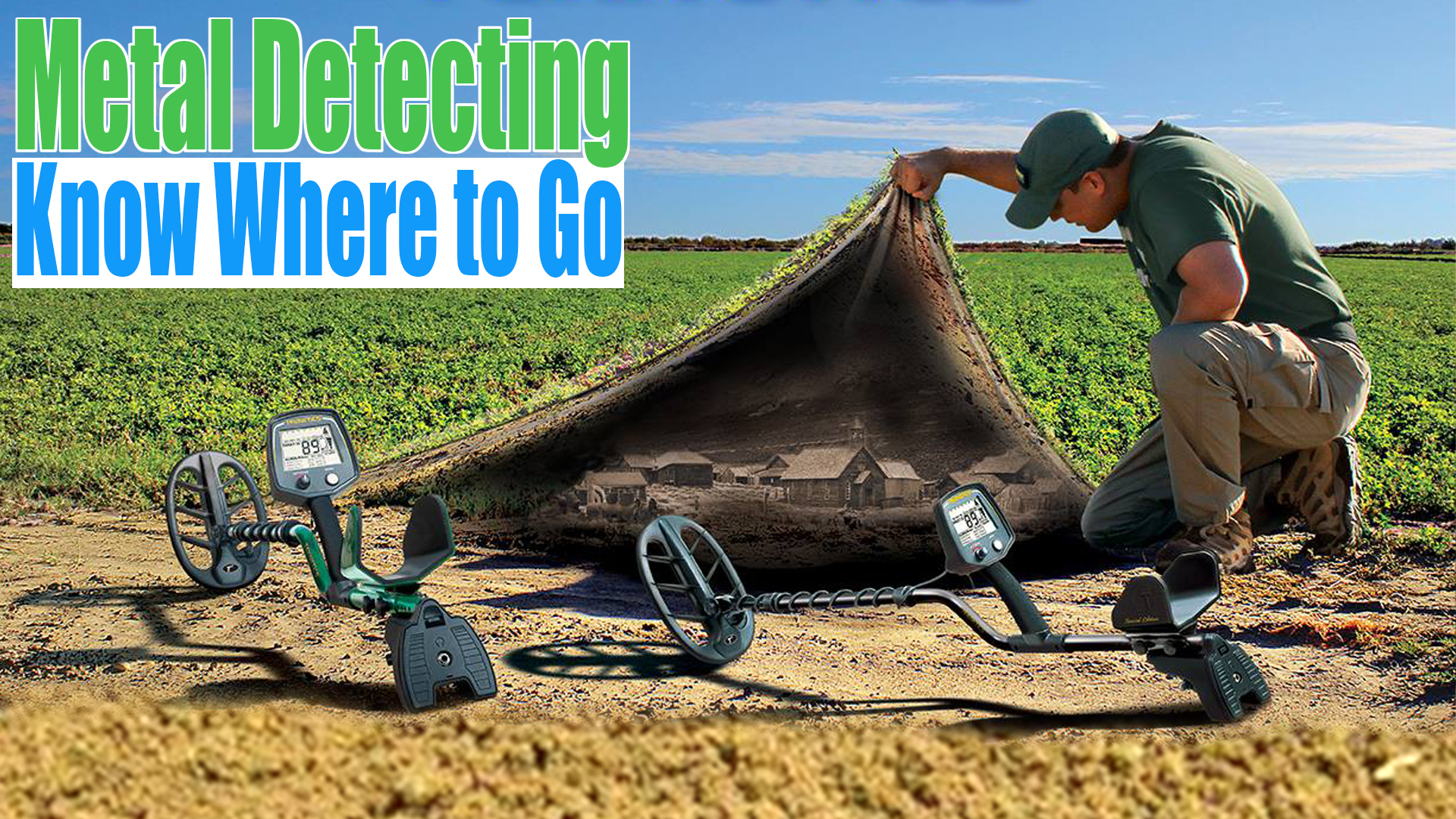 "Where can I metal detect for old coins and Jewelry?" It's one of the most frequently asked questions from new and beginning metal detectorist. Truth be told, it is a question you will continue to ask yourself for as long as you are in the hobby of metal detecting. Fear not, were going tell you about 20 great spots to metal detect.

Before we get started let's cover the number one rule when it comes to metal detecting. DO NOT enter any property without first obtaining permission from the land owner. I repeat get permission first! Secondly check local state and federal laws to ensure you are legally allowed to metal detect in that particular area.

Ok, now that we've got that out of the way let's dig in! (The following areas are listed in no particular order)

1.  Your own front and back yard

We know, it's not the most exciting, exotic or adventurous spot, but your yard has great potential for metal detecting. Some of you live in houses that are more than a hundred years old! Even if your house is only a couple of years old there's still great opportunity to find treasure you or your family members may have dropped. What about the people who lived there before? Who knows what they dropped. Perhaps they lost jewelry while gardening, or maybe change fell out of pants pockets that were hung on the old clothesline.

I can't remember how many times I lost my lunch money or heard another kid lamenting about losing their lunch money at recess. How about lost rings or cool relics that may have been brought in for show and tell? Some truly amazing things have been found in school yards. Just be sure to only detect when school is not in session.

There are all kinds of treasures that can be found by metal detecting sporting fields (soccer fields, football fields, baseball diamonds, etc.). Most of the treasure is lost by the observers and not necessarily the players. So pay particular attention to where the parents and fans are setting up their chairs. Personally, I stay off the playing surfaces of these fields as I don't want to inadvertently cause an injury if my plug didn't reset perfectly. This is a personal decision for me, if you decide to detect the playing areas try your best to make the smallest cuts possible and fill in your holes as best as you possibly can.

How many times have you heard someone say "I lost my bus money". Heck I've lost my bus money as a kid fiddling with the coins out of boredom. This is one of those places that is often overlooked by metal detectorist.

Drive-Ins are the perfect setting for lost coins. Preoccupied movie watchers making multiple trips in the dark to and from the snack-bar, trying not to block the view of other movie goers, while carrying popcorn, soda, candy and their change. Pay special attention to the snack bar area and if there are any paly grounds at the drive-in be sure to hit that too.

Wherever people congregate or play, you will find lost coins and possibly gold and silver jewelry. Parks are no exception! Be sure to pay special attention to playgrounds, the sides of sidewalks and paths, under and around shade trees and along basketball courts where the players often times drop their backpacks, jackets, etc.

Hunting camps can often be quite profitable and usually not metal detected much, if at all. For safety and to avoid irritating the local hunters, be careful to only metal detect these areas when it isn't hunting season.

Freshwater and saltwater beaches are always great places to hunt. One might think you have to get in the water to make great finds, this isn't so. One of the most productive areas to metal detect is what is known as the "towel line". This is where beach goers set their towels up and spend most of their time at the beach. They often take their rings and other jewelry off, lying them down on their towels before going into the water. When they come back, they pick up the towel to dry off and the jewelry goes flying.

Scout out the lay of the land during the fair. Look for the jewelry stands, often times jewelry is dropped during setup and or breakdown. Customers will also drop their own jewelry when trying on or buying new jewelry from the vendor. Also look for food stands and dressing areas where attendees change into and out of costume.

Pay particular attention to areas where the students would congregate. Libraries, sporting fields, hangouts etc. You'll be rewarded with all kinds of treasure from coins and jewelry to keys and more.

This is more of a time rather than a spot as they are often setup in parks or parking lots. Pay attention to where the food booths were and any ride that flips the occupants upside down.

Be on the look out for any roadside stands (fruit, vegetables, etc.) Motorist will pull over all day long to purchase from the vendors and they will inevitably drop coins.

You'll find campgrounds in state and county parks and these often have rules and regulations so make sure you are allowed to hunt them first. However there are a ton of privately owned campgrounds which might be easier to get permission to hunt. Campgrounds offer a ton of opportunities to find all kinds of treasure.

One of the best places for dropped jewelry is at the bottom and top of ski lifts. The cold causes the skin to tighten up effectively shrinking skiers ring size and when they remove their gloves to fasten or unfasten equipment, off fly the rings, lost in the snow until you and your metal detector find them during the off season. You may also want to metal detect along the path of the ski lifts as skiers often time fiddle with equipment and take pictures during the ride to the top.

Boy Scout and Girl Scout camps are great places to detect for both coins and jewelry. Many times these scout camps have been around for many years and have a lot of history. Scouting memorabilia can be quite valuable as well.

Old churches can be great places to hunt as well. If given permission make sure to stay clear of any cemeteries.

These are excellent places to find old coins, jewelry and relics. Just be sure you have permission and are legally allowed to metal detect. Many ghost towns are located on private property and are easy to get permission to hunt.

Rest Stops can provide great metal detecting too. State and county rest stops might be off limits, check with the local government but there are a lot of rural stop areas that are on public land.

In the old days, people didn't trust putting their money in the bank. Many times they buried their savings near the corner post of their barn. You can also find interesting old tools, which can be quite valuable as well.

Along with the barn be sure to check old chicken coops farmers often times placed their valuables in the chicken coop, knowing the chickens would sound the alarm if anyone or anything tried to get into the coop.